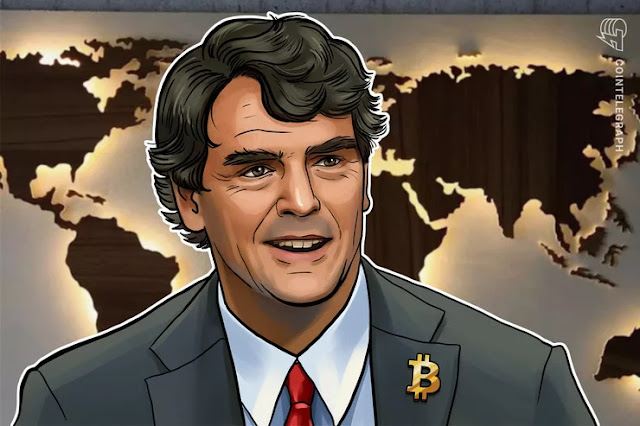 Bitcoin (BTC) will have a 5% market share of the entire world by 2023, serial VC investor Tim Draper told FOX Business in an interview on May 10.
Speaking on the sidelines of the Salt Conference in Las Vegas, Draper — who has become a stalwart bitcoin advocate — said the largest cryptocurrency would continue to gain dramatically in price.
“It’s going to keep going because, I’m a believer than in four years, something like that, bitcoin will be about a 5% market share of the Earth,” he told the network. Draper added:

“It’s a better currency, it’s decentralized, open — it’s transparent; everybody knows what happens on the blockchain.”

As Cointelegraph continues to report, bitcoin’s 2019 bull run continues this week, with BTC/USD passing the $6,000 mark to set its highest level since November 2018.
Appearing in his now trademark bitcoin tie and socks, Draper added that he envisioned running an entirely bitcoin-dependent company, where transactions used it exclusively.
“I eventually want to have a fund where I take in bitcoin and I fund everybody in bitcoin and they pay their employees and suppliers in bitcoin and then I pay my investors in bitcoin,” he continued. Draper then stated:

“Because I would then require no accounting, no legal, no bookkeeping, no custody — it would all be done.”

Cryptocurrency wallet and investment app Abra now allows users to connect accounts from “thousands” of U.S. banks, the firm announced Thursday. The expanded bank options come courtesy of an integration with Plaid, a fintech service that enables applications to connect with users’ bank accounts using APIs. Until now, Abra users in the U.S. and EU […]