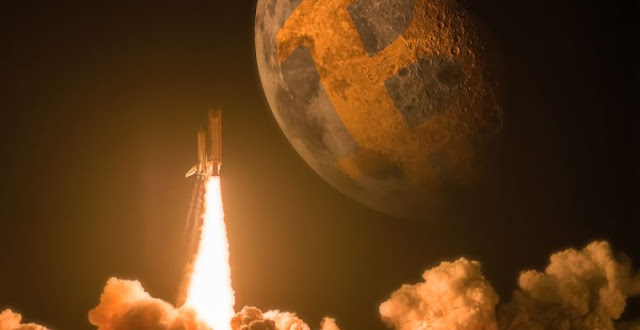 A few hours ago Bitcoin blasted through resistance again to record a new high for 2019. Crypto markets are on fire this Monday morning as total capitalization hits its highest level since July 2018. Is BTC poised to touch five figures again this week?

According to Tradingview Bitcoin touched $8,940 a couple of hours ago before a slight pullback. It is the highest price BTC has traded at for over a year. The last time Bitcoin was anywhere near $9,000 was in early May 2018. 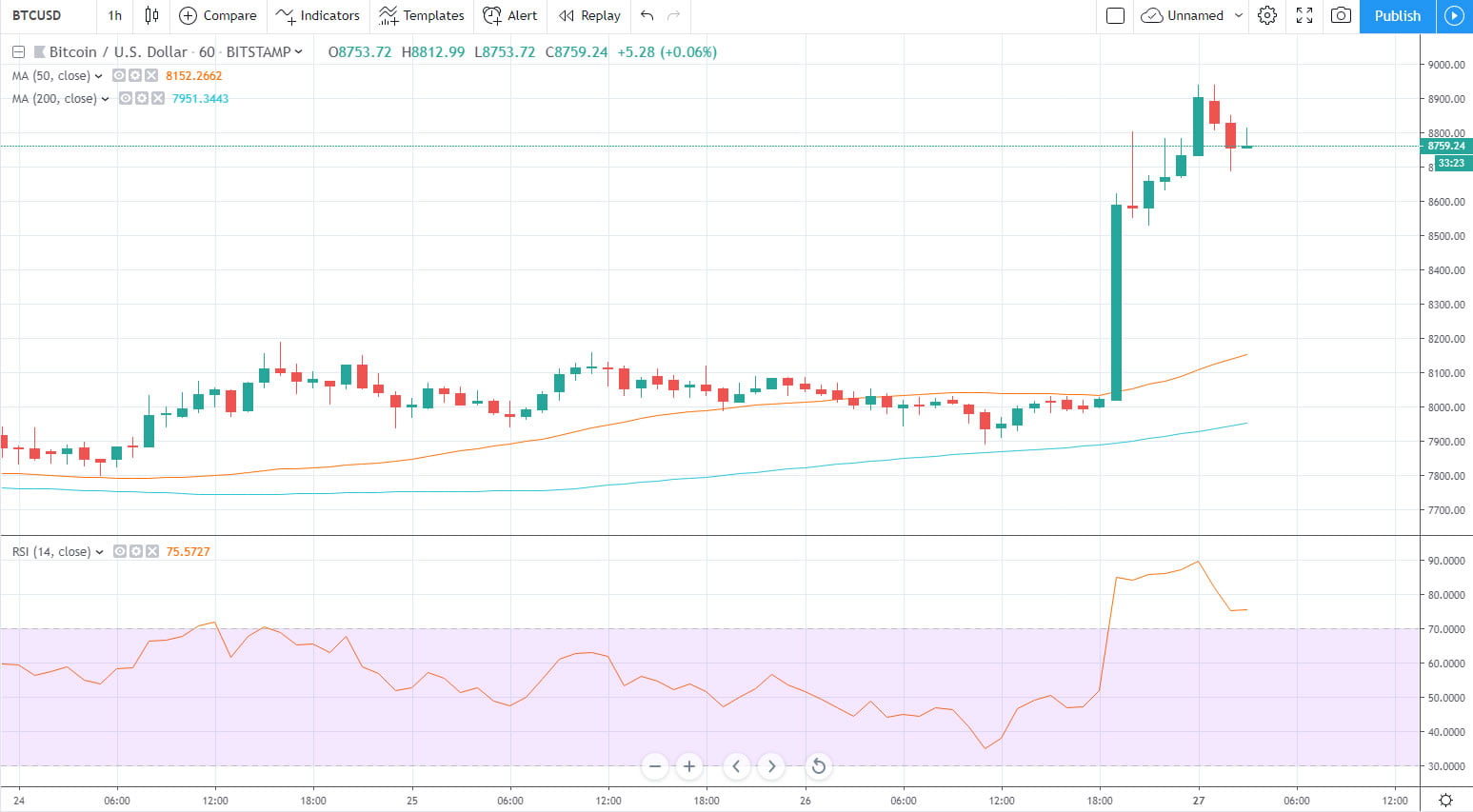 Bitcoin prices 5 days – Tradingview.com
The move started a few hours ago when Bitcoin surged from an intraday low of $7,930 to top out over $8,900 in an epic 12 percent pump. Daily volume has cranked up to almost $30 billion and BTC market capitalization is at $155 billion, more than the entire crypto cap was just two months ago in March.
Analysts have been scouring the charts to see where BTC will go next. Long term crypto trader ‘CryptoFibonacci’ expects a retest of the moving averages;

“Things are massive bullish right now and there is no need to fight it or try to predict a pullback.  But, when they do, here is what i see.  A move to 9500, rejected hard.  Then a big pullback to some ema and Fib support.  Consolidate for a little while,”

Thing are massive bullish right now and there is no need to fight it or try to predict a pullback. But, when they do, here is what i see. A move to 9500, rejected hard. Then a big pullback to some ema and Fib support. Consolidate for a little while,#BTC

See CryptoFibonacci’s other Tweets
A correction has been predicted since Bitcoin started its upward march in early April. It hasn’t come and those minor retracements to $7k have not lasted long before the bulls got back into the driving seat. Trader Josh Rager has also predicted higher moves above $9,000;

“Some people were screaming triple top when the more obvious conclusion is retest after restest of resistance will finally lead to a break to the upside. Bitcoin could cool off, run sideways but IMO will continue to move up over $9k”

Things could all be ruined by the CNBC counter trade indicator though which is adding to the sentiment that Bitcoin will push past $9k with ease;
View image on Twitter 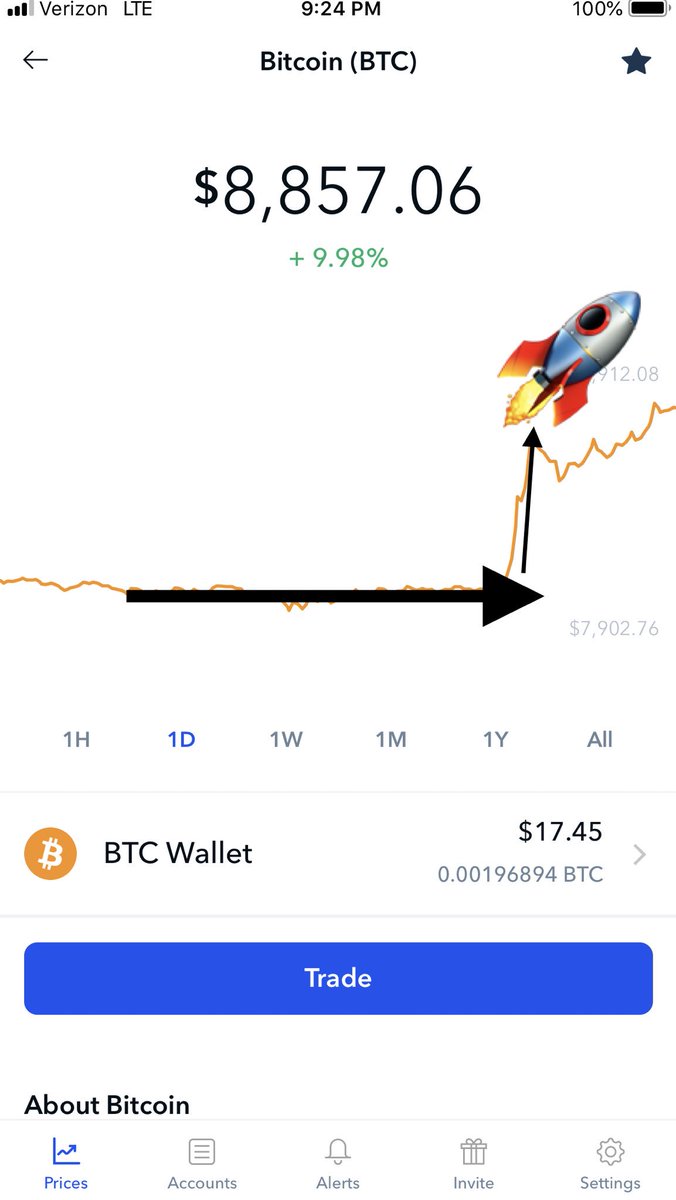 @CNBCFastMoney
It happened. Could $10k be next for bitcoin?

487 people are talking about this
Twitter Ads info and privacy
Either way, the Monday morning momentum is strong and all of the altcoins are in the green at the time of writing, following their big brother as it chases down those double digits.
Top performers right now include Litecoin which has continued surging 12 percent today and is now trading at $115. Another fomo inducing tweet from Justin Sun has sent Tron on a 14 percent run to reach $0.032 and Bitcoin SV has cranked up 17 percent today taking it to $107.
Not far behind are Bitcoin Cash, EOS, Cardano, and Monero all cranking over 8 percent at the time of writing.
Bitcoin Surges to Highest Price For Over a Year, Will it Reach $10k This Week? BEST WALLET, bitcoin cash wallet, bitcoin wallet, btc wallet, buy bitcoin, buy cryptocurrency, coin wallet, crypto wallet cryptocurrency wallet, Digital Wallet, ether wallet, ethereum wallet, safest wallet, secure crypto wallet, usd to bitcoin , blockchain, block chain, blockchain wallet, what is blockchain, blockchain info, keywords, bitcoin price , ethereum price , bitcoin news, coinmarketcap , BTC price, coinbase, bitcoin, Scam News, BTC

Facebook in Talks With Coinbase, Winklevoss’ Gemini to Launch Its Globalcoin: FT Report

Social media giant Facebook has reportedly held talks with major United States-based crypto exchanges about the issuance of its own crypto, the Financial Times (FT) reports on May 24. Citing two people familiar with Facebook’s “Globalcoin” project, the FT wrote that Facebook has discussed the initiative with major crypto exchange and wallet Coinbase. The article also notes that Facebook reportedly spoke with the Gemini exchange, which was […]

Report: Bitcoin’s Recent Surge Due its Maturation as an Asset

New data suggests that bitcoin’s (BTC) growth is explained by its maturation as an asset based on conversations surrounding the leading cryptocurrency, Bloomberg reported on May 15. Bloomberg cited a report from web intelligence platform Indexica, that developed an index based on natural language processing of textual documents in an effort to explain bitcoin’s recent surge. The research […]

Blockchain data provider TokenAnalyst estimates that capital outflows from major crypto exchanges have exceeded inflows by ~$622 million over the past five days, Bloomberg reported on May 15. London-based TokenAnalyst has reportedly based its figure on an analysis of withdrawals and capital inflows on multiple crypto trading platforms — including Bitfinex, BitMEX, Binance and Kraken. While bitcoin (BTC) […]