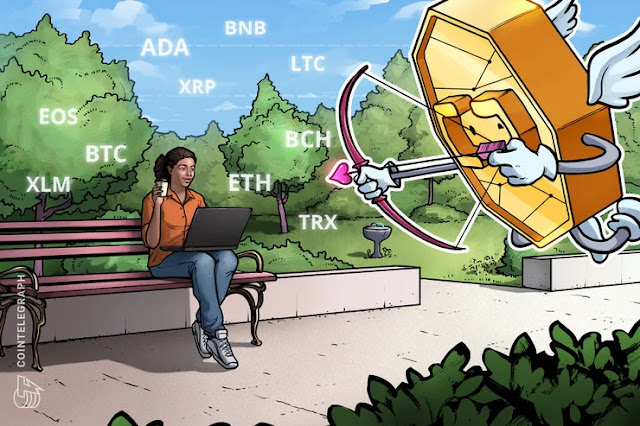 The views and opinions expressed here are solely those of the author and do not necessarily reflect the views of Cointelegraph. Every investment and trading move involves risk, you should conduct your own research when making a decision.
Market data is provided by the HitBTC exchange.
Crypto markets are welcoming a series of good news. The much-awaited platform Bakkt has finally announced that it will start testing Bitcoin futures trading in early July of this year. This is likely to attract a lot of institutional investors.
Though cryptocurrencies are not strongly correlated to any asset class, the sharp fall in U.S. stock prices due to the escalation of trade war between the U.S. and China is providing an added impetus to crypto prices. While many traders milk the volatility of the crypto markets, about 12% of the crypto traders stay invested for the long term, according to a survey by HBUS.
While the stage is being prepared for institutional investors, mass adoption of cryptocurrencies is another important factor for long term growth of the asset class. Two companies, Starbucks and Facebook, have been in the news for the past few months on rumors of their involvement with cryptocurrencies.
While Starbucks is expected to start accepting Bitcoins at its retail stores, Facebook is likely to launch its own cryptocurrency named FB Coin, which is a stablecoin. Though the actual details are sketchy, these companies have massive reach among retail customers and their arrival will boost crypto adoption among the masses.
These fundamental developments are pointing towards the growth of the asset class. However, the question remains on which cryptocurrency will be the major beneficiary. Michael Novogratz, CEO of Galaxy Digital,  believes that Bitcoin will only be treated as a store of value and other networks will grab attention with their use cases.

Bitcoin (BTC) is skyrocketing.  The pace of the rally has surprised us. It has scaled above the overhead resistances with ease. This shows that the bulls have continued to buy on every rise without waiting for a dip. While this is a positive sign, the pace of rise is unlikely to sustain for long. Traders can trail the stops on the remaining long positions at $7,100.
The next level to watch on the upside is $8,496.53 and above it, the move can extend to $10,000. It is difficult to predict where the rally will stall. Therefore, traders can keep trailing the stop loss to protect their paper profits. The next pullback is likely to be sharp and deep.

Both the moving averages are trending up, which shows that the bulls are firmly in the driver’s seat, but the RSI has risen deep into overbought territory. This suggests that the traders are chasing the price higher and the pair is vulnerable to a pullback. On the downside, the BTC/USD pair might find support at $6480.54 and below it at the 20-day EMA. This will indicate strength and signal the end of the bear phase.
On the other hand, if the bears sink the digital currency back below $5,900, it will dampen sentiment.

Ethereum (ETH) soared on May 11 to above $200, but the bulls could not sustain the rally. After that, the attempt by the bears to plummet the price back into the triangle failed. Currently, the bulls are again trying to sustain above the $200.

Both the moving averages are sloping up and the RSI is near the overbought zone. This shows that the bulls are in command, but we are yet to see a sustained up-move. The targets on the upside are $225 and above it $256.
However, if the ETH/USD pair picks up momentum, it can surprise to the upside and rally to $300. Our bullish view will be invalidated if the bears sink the pair back into the triangle. For now, the stop loss on the existing long positions can be kept at $160.

Though Ripple (XRP) is still in the range, it is pointing to a breakout. If the bulls succeed in pushing the price above $0.33108, it can rally to $0.37835. The digital currency is likely to pick up momentum above this level. We will wait for the price to sustain above $0.33108 before proposing a trade in it.

Bitcoin Cash (BCH) soared above the range on May 11, which is a positive sign. We like the way the bulls held the price above the previous resistance-turned-support of $335.62. The 20-day EMA has turned up and the RSI has reached the overbought zone. This shows that the bulls are in command.

The BCH/USD pair can now rally to $424 and above it to $500. Our bullish assumption will be negated if the pair breaks down of the support at $335.62 and re-enters the range. The trend will weaken if the bears sink the price below the 20-day EMA. In such a case, the price will remain range bound between $255 and $335.62.

Litecoin (LTC) surged above $91 on May 11 and 12 but it could not close above the resistance level. The pullback from this level was shallow as the digital currency found support at $83.653. The bulls are again trying to scale above the overhead resistance at $91.

A breakout and close will complete the bullish cup and handle pattern. This has a target objective of $158.91. Traders can buy the LTC/USD pair on a breakout and close (UTC time frame) above $91. The stop loss can be kept at $70, which can be raised later. Please keep the position size about 50% of usual as the risk of a pullback is high.
Contrary to our assumption, if the pair turns down from $91 and plummets below the 20-day EMA, it can drop to $70. The pair will turn negative on a breakdown of $66.470.

EOS turned around from just above $4.4930. The bulls quickly propelled the price above the uptrend line and the 20-day EMA. There is a minor resistance at $5.50, above which a move to $6.0726 is probable.

On the contrary, if the EOS/USD pair fails to sustain above the overhead resistance at $5.50, it can remain range bound between $4.4930 and $5.50 for a few days. It will turn negative on a breakdown and close below $4.4930. We do not find a buy setup that gives us a good risk to reward ratio at current levels, hence, we do not recommend a trade in it.

Binance Coin (BNB) reversed direction from just below $18 and rallied above both moving averages and the uptrend line of the wedge. This is a bullish sign as it invalidates the breakdown of the wedge.

The bulls are attempting to push the price towards lifetime highs. A breakout and close above the lifetime highs will be a bullish sign. We might suggest a long position if the price sustains such highs.
Conversely, if the bulls fail to break out of the new highs, the BNB/USD pair might remain range bound for a few days. The trend will turn bearish on a breakdown of $17.50.

Stellar (XLM) is trying to pull back, but is facing resistance at the moving averages. If the bulls push the price above the 50-day SMA, it can move up to $0.12039489. The long-term downtrend line is located at this level. We expect the bears to offer a stiff resistance at this point.

Cardano (ADA) reversed direction from $0.057898 on May 10 and broke out of the downtrend line on May 11. It has been facing resistance at $0.080 for the past two days. Both the moving averages are flat and the RSI is just above the midpoint. This suggests a range formation in the short term.

Tron (TRX) remains stuck in the $0.02094452–$0.02815521 range. It has not participated in the current recovery, which is a negative sign. Both the moving averages are flat and the RSI has been hovering below 54, which suggests that the bears have a slight advantage.

The views and opinions expressed here are solely those of the author and do not necessarily reflect the views of Cointelegraph. Every investment and trading move involves risk, you should conduct your own research when making a decision. Market data is provided by the HitBTC exchange. Bitcoin witnessed a flash crash on Bitstamp exchange when it plunged to a […]

The views and opinions expressed here are solely those of the author and do not necessarily reflect the views of Cointelegraph. Every investment and trading move involves risk, you should conduct your own research when making a decision. ?arket data is provided by the HitBTC exchange. Bitcoin has been crossing every overhead resistance with ease. A few […]